There are many myths about ways to prevent or eliminate pack rats.  Since pack rats are all we do, trapping over 5,000 rats a year.  When someone calls us they have often tried everything.  We have heard of and seen almost all the pack rat mythical solutions.

Recently I have come across some situations where I could actually get pictures to disprove a few of these myths.

We received a call about pack rat in a pool heater.  The customer had been told that if she put Irish Spring soap around the pool heater it would keep the pack rats away. Below is a picture of what the rats thought about her Irish Spring. 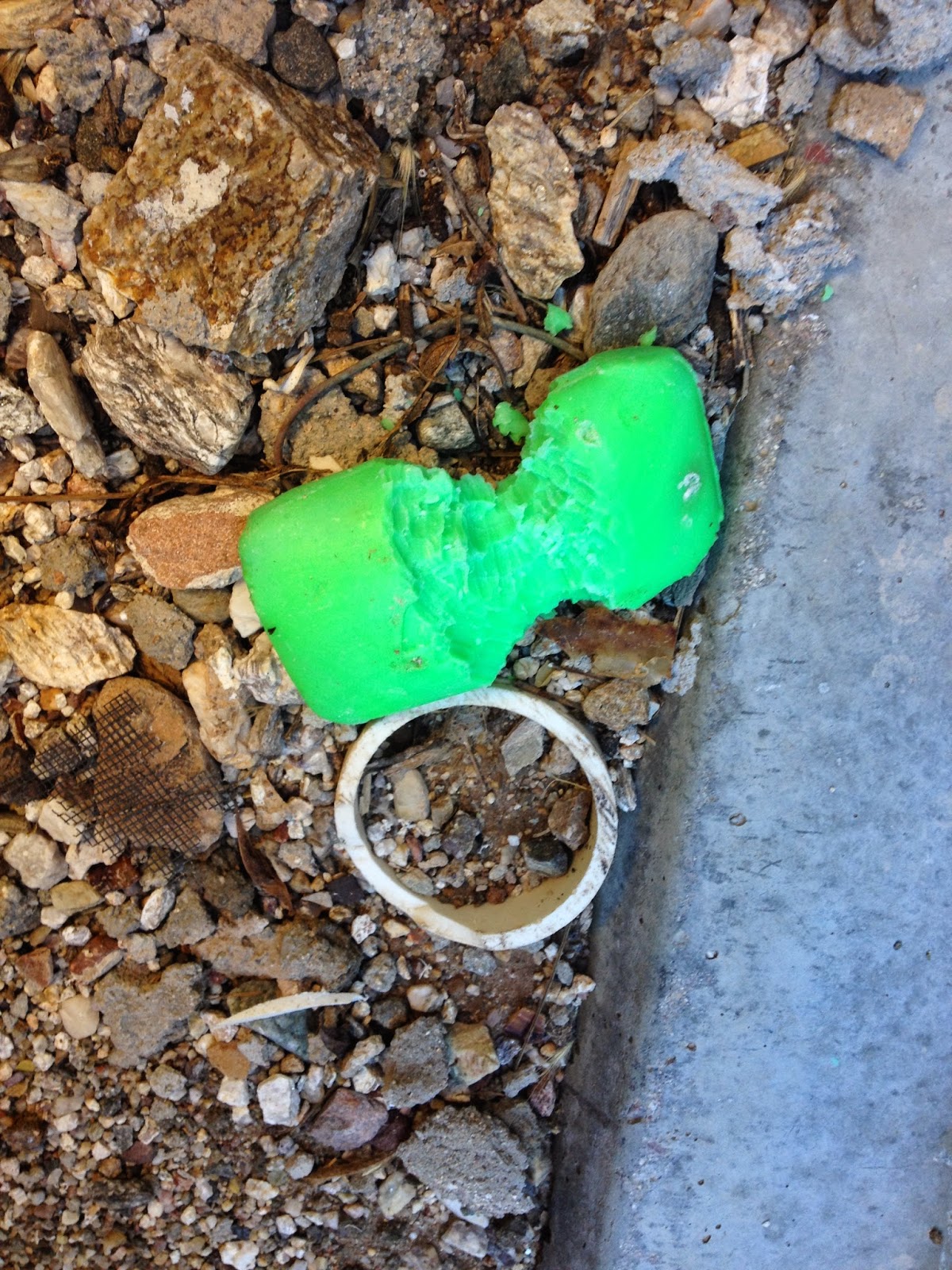 Inside the pool heater was even more evidence of just how much the rat liked the soap. 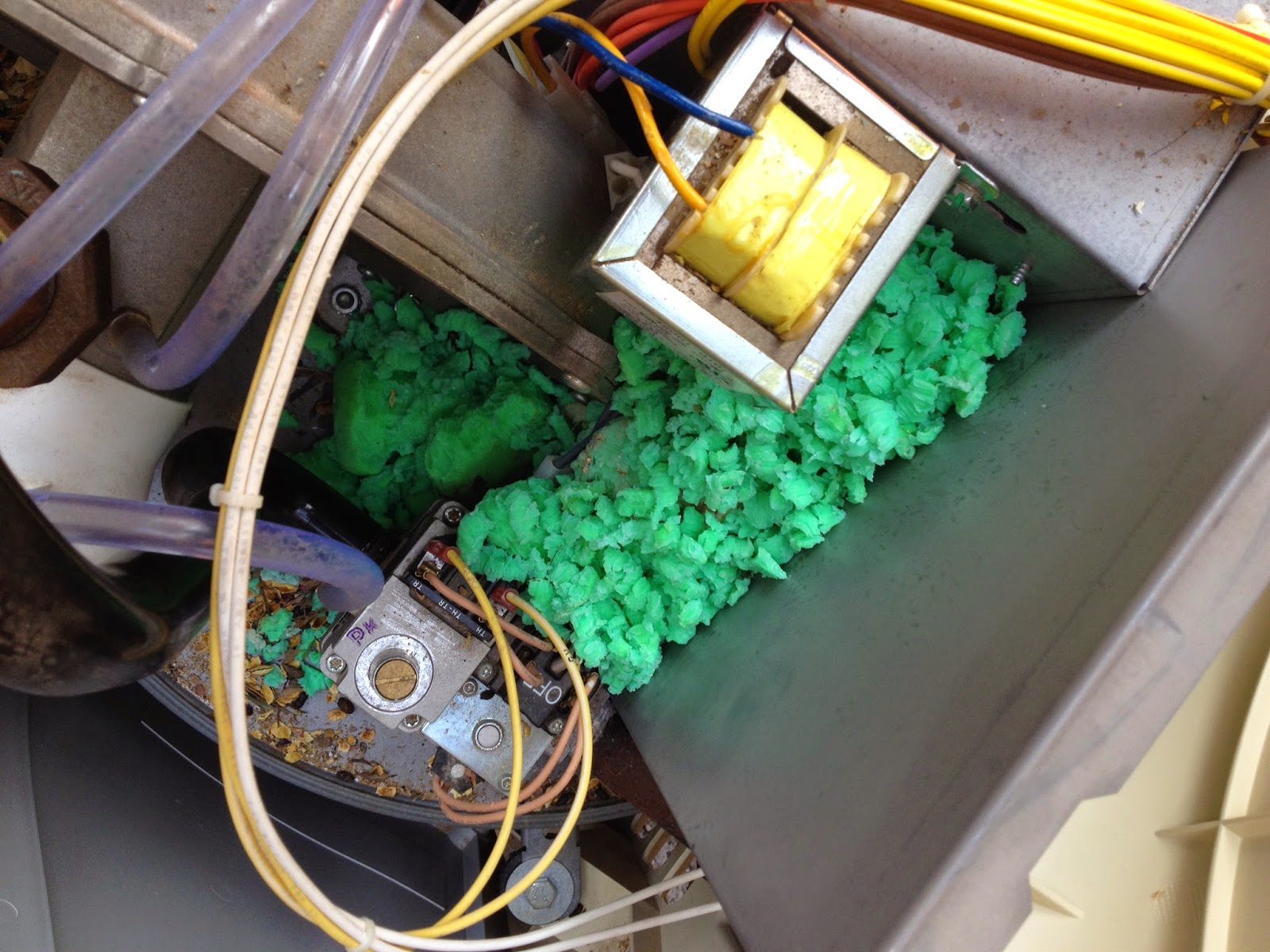 Needless to say Irish Spring does nothing to repel or prevent pack rats. The same goes for Ivory Soap, dryer sheets, urinal cakes and moth balls.  All of these items are scented and the belief is the scent will drive the pack rats away or at least hide the scent of any previous rats.  Bottom line is no - pack rats go where they feel safe, you can't change that with any scent.  In the case of the pool heater above, we simply caught the rat, screened off the openings into the heater and the problem was fixed permanently!


2.  Sonic Devices emit a sound that will keep rats away.

Something we run into frequently.  Some people swear by them, but more try with no success.  I am not aware of any true double blind scientific study on sonic devices that shows they actually work.  All the evidence is anecdotal.   I guess you could say they keep dinosaurs away too, because I have never seen one near a sonic device.  I have seen pack rats and pack rat evidence frequently near, on and around sonic devices. Below is a picture of a fairly expensive sonic device.  It is in the upper left corner of the picture.  Look carefully to the right. 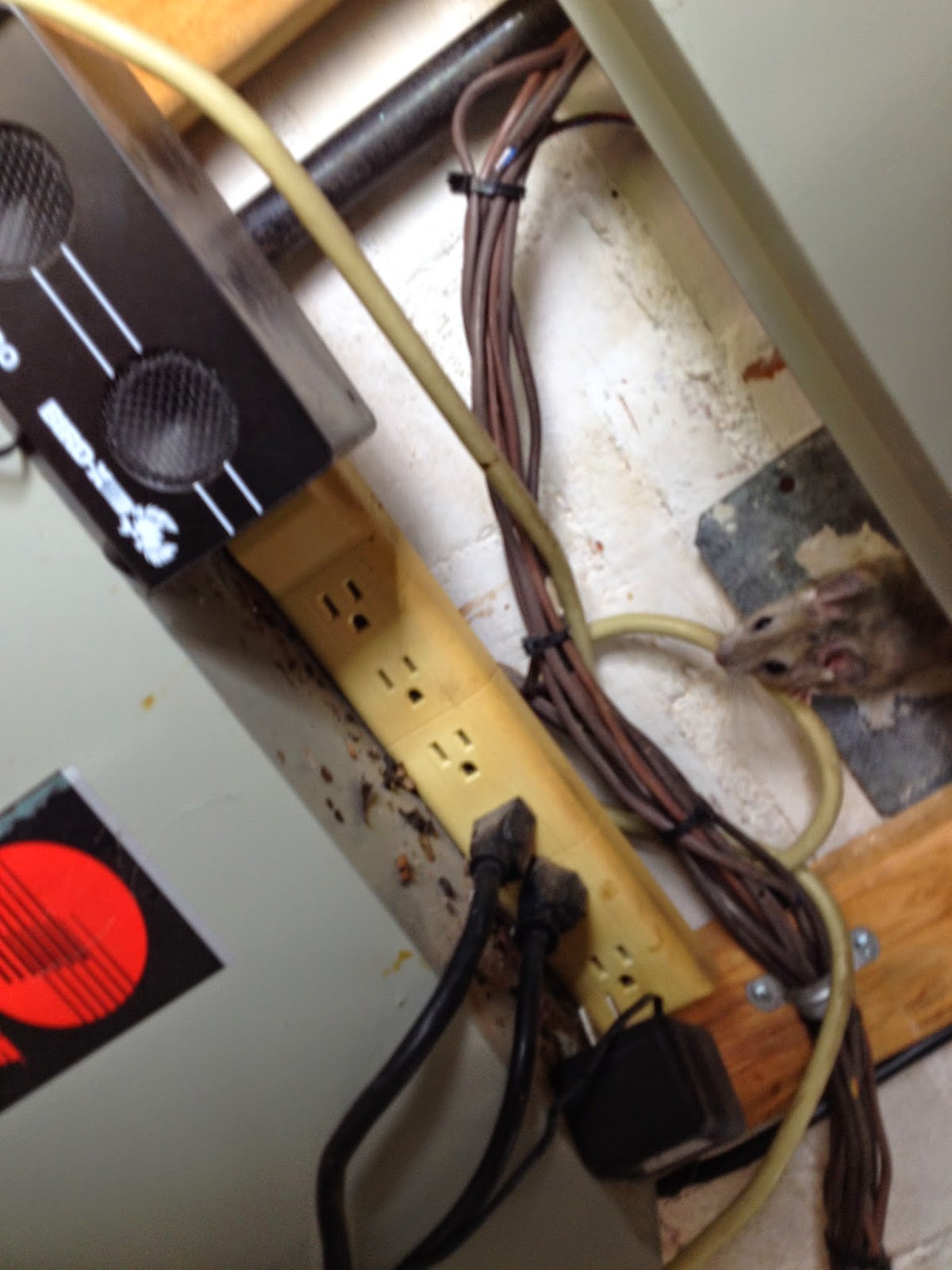 Pack rat with its own sound system

Yes, that is a pack rat and he was living quite comfortably in the furnace room with the sonic device, though he did eventually cut the power wire effectively turning it off.  See the picture below and you will see the two loose ends of the cut wire.

I don't think the rat was smart enough to cut the wire on purpose, they just love to chew wires.   This situation was easily fixed once the customer called Mr. Pack Rat after years of trying everything to keep the rat out of this furnace room. We caught the rat, and sealed off the entry points.  Permanent fix again!

There is a device marketed to repel pack rats that is a tiny strobe light that flashes every few seconds on an intermittent basis.  The idea is the light will startle and scare the pack rat.  Again the company that sells these lists anecdotal evidence and customer testimonies, but no scientific evidence.  We have had many people call us who have tried these little devices with no success.  They may work initially to some degree, but pack rats adapt.

Below is a recent picture of one of the devices placed under a grill.

The rat covered it with cholla so maybe it was a little annoyed, but certainly was not deterred.  We rat-proofed the grill. Problem solved.


4.  Bait Boxes have magical powers to drive rats away

These days bait boxes are used to hold poison bait and sometimes snap traps. By design the boxes are an attractive place for rats to go and feel safe. That is one of many problems with bait boxes - you do not want to attract rats to be near your home!  In fact you want to do everything you can to make the area less attractive through proper landscaping and storage practices.

When pack rats spend time in a place they leave their scent through urine, body oils and droppings.  This makes the bait box even more of a pack rat magnet.  Take a look at the inside of the box below.

The pest control operator had good intentions and at least they did not use poison bait, but the box is checked once a month, maybe.  The trap may catch a rat, but is just as likely to get sprung by a mouse or lizard.  All month long and month after month, the scent from the box draws in rats from the surrounding area.  The box has become the problem itself, not the solution.


It is amazing how many of these boxes we see. Often they have been left behind from some previous service, sometimes for years.  For some reason people just leave them in place thinking they have some magical power to keep rats away all the while giving the rats a safe place to hide.

If poison bait is used, now you are giving them food. That is what poison is to a pack rat - food.   What does a pack rat do with food - they hoard it, often storing vast quantities in their nests.  One rat can clean out a bait station overnight.  It may or may not actually eat the bait.


If it does it will die, first becoming sick after about 5 days and dying in another 3-5 days. During the sick period, that rat is slow, may be out during the daytime and generally not acting right.  Easy pickings for a predator, especially hawks and owls.  If the rat has poison in its stomach there is a good chance the hawk or owl will die too.  Bottom line you may kill some rats, but you will attract far more than you kill. Worse of all the rats reproduce so fast the poison makes little difference to their population, but owls and hawks reproduce slowly and can completely disappear in areas where poison is used. 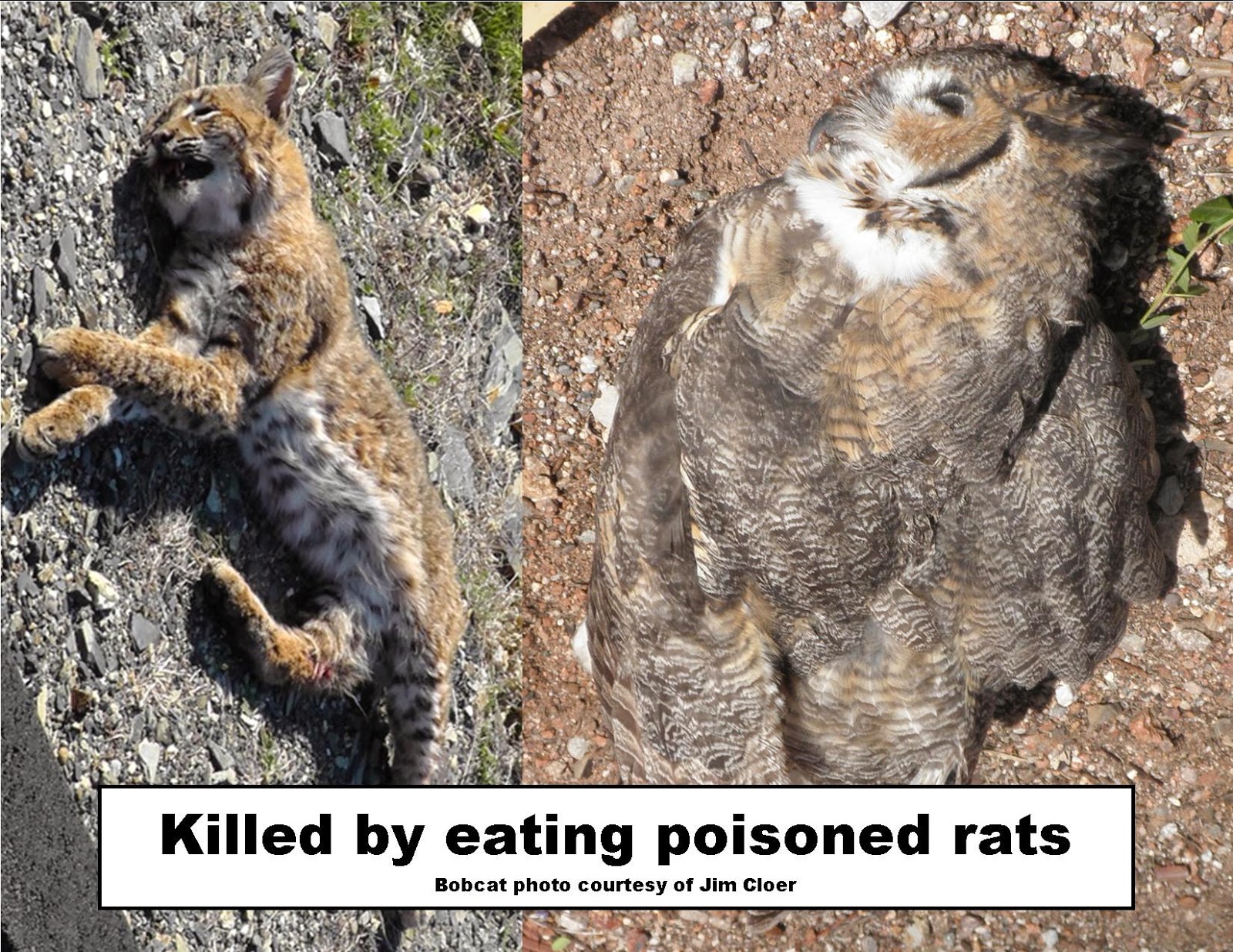 Other things that don't work:

There is no magical easy solution for pack rats that will just make them go away.  Pack rat problems can be solved with a good understanding of pack rat behavior and usually some hard work.  This blog and our website are meant to educate and help you find solutions that actually work.