I am re-posting this blog from last year for those who want to know more. With the warm dry nights of late May, adult kissing bugs are beginning their annual nighttime dispersal flights when they leave their homes in pack rats nests to seek mates and new hosts.

Normally guided by starlight, the insects are easily fooled and drawn to the much brighter light emitted from homes.  As the sun rises, the kissing bugs seek any crack, crevice or other dark place to hide for the day. At night they emerge to seek food and for a kissing bug food means the blood of any sleeping or sedentary warm-blooded mammal, including humans.

Other names for this group of bugs includes cone-nose bugs, assassin bugs, and triatomines, but kissing bug is the most common.  The term comes from one very specific species, in South America that has a tendency to bite its victims around the mouth area - thus kissing bug! 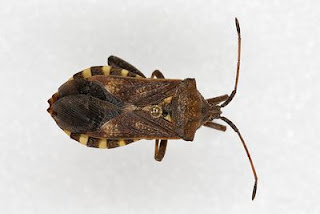 The picture above is a true bug (Mozena obtusa) that feeds on mesquite trees and not blood. Here are is link to many similar looking bugs that are not kissing bugs.

Another factor to be aware of is that young immature kissing bugs look slightly different than adults. 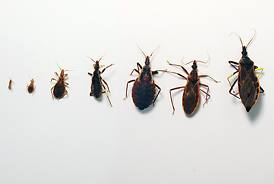 Why should you care?
In the Tucson area, most people really don't have to care about kissing bugs.  Unlike other parts of the world, kissing bugs here are not big disease carriers.  The bite can itch a little but is not a big deal - for most people.

Unfortunately, for a few, a bite can be deadly - about 2% to 7% of the population becomes sensitized and experience a severe allergic reaction after a second or subsequent bite. The reaction to the first bite may be mild.  The second bite has more redness and swelling. With each bite, the reaction becomes more severe and symptoms can include swelling, nausea, fever, cramps and life-threatening anaphylactic shock requiring immediate emergency medical treatment.

What about Chagas Disease?
If you Google kissing bugs you will find a lot of scary information on kissing bugs and Chagas disease. Don't worry! For many reasons, some still not fully understood, the risk of contracting Chagas from a kissing bug bite in Arizona is extremely low. The risk is an allergic reaction is far higher.  Here is a link to some Tucson specific research done by the University of Arizona.

What to do if you have been bitten?
If you have a reaction to a bite that is more than a small itchy bump, you should check with a doctor or if there is any doubt call Poison Control, 1-800-222-1222.  If you have a worse reaction to a subsequent bite - seek help and be prepared.  If you become sensitized, you cannot predict how you might react to the next bite.  People severely sensitized must keep an EpiPen (epinephrine auto-injector) with them at night just in case.  Many others keep some liquid Benadryl handy in case they begin to have an allergic reaction.  Any medication will just give you a few more minutes to seek medical attention.  If you think you are having an allergic reaction - seek help ASAP.

The worse method of control – poisoning the pack rats!