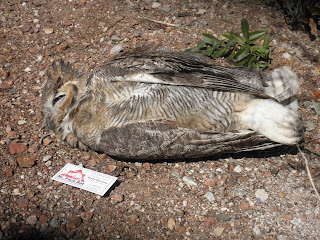 People just don't realize how dangerous rat bait can be for local wildlife.  Poison rodent bait is designed to be used only for three specific types of rodents - Roof Rats, Norway Rats and House mice.  The poison is meant to be used in urban areas and all rodenticide labels caution against the use of poison in areas where wildlife may be present.

I think if the public really understood the danger's of rat poison to wildlife they would think twice before using or letting their exterminator use poison bait.

• 11 of 12 mountain lions tested positive for exposure and two died from rat poisoning.

• 93 of 105 bobcats tested positive for exposure and 70+ died from related secondary disease.

• 20 of 24 coyotes tested positive for exposure and 12 died from poisoning.

Unfortunately no one tracks wildlife poisonings in the Tucson area, but be assured the problem is no less severe.

In general, Californians tends to be more environmentally aware and educated than other areas of the country. In part because the topic is in the news. Some excerpts from two recent California articles:

The body of P-34 was found by a runner on Sept. 30
at Point Mugu State Park. A necropsy proved
the mountain lion was killed by rodenticides.

"A young mountain lion was killed in late September after ingesting rat poison that came from a poison bait box, according to authorities with the National Park Service (NPS) at the Santa Monica Mountains National Recreation Area (SMMNRA)."

"P-34 is the latest of several larger mammals found dead as a result of rodenticide poisoning in the SMMNRA, according to the NPS, with two other mountain lions and many coyotes falling prey to what Poison Free Malibu calls the “chain of death.”
"As smaller rodents ingest poison and die, they are sometimes eaten by larger animals, such as coyotes and mountain lions, who then fall prey to the anticoagulant rodenticides found in the smaller rodents and birds."
“I think we need to work collectively to raise awareness so that people understand that when they utilize rat boxes, they understand what happens to the environment around them — to the habitat surrounding it,” another Poison Free Malibu founder, Wendi Dunn, said. “We are not separate from our environment — we are not ever. We are all part of the system.”

SAD SIGHT—This coyote, found ill from being
exposed to rat poison, is being cared
for by the California Wildlife Center in Calabasas.

"When people use anticoagulants to get rid of unwanted critters, they don’t just kill rats and mice—they also imperil wildlife, pets and children."

"Nearly all mountain lions, coyotes, bobcats, hawks, owls and other wild animals in the Santa Monica Mountains and Simi Hills are exposed to rodenticides."

“Animals suffer; they bleed internally and lose all their blood,” said Duane Tom, director of animal care at the California Wildlife Center."
"When carnivores feed on rodents that have ingested anticoagulants, they accumulate the poison in their system."
"Many animals brought to the wildlife clinic have bruising and excessive bleeding due to repeated exposure to the poisons."
“Without doubt, anticoagulants are a big concern for wildlife and also for pets. The poison is also a problem for young children. It’s not a benign thing that people just put out to get rid of mice and rats. As you poison these animals, they don’t die right away,” said Tom, who has worked at the wildlife rehabilitation facility south of Calabasas for nine years.
"Rodenticides are indiscriminate killers, and the bait boxes that contain them attract all kinds of animals.
Most coyotes, bobcats and cougars that die from mange—a skin disease caused by parasitic mites—also test positive for rodenticide exposure.


Wild predators are needed to regulate the rodent population.

If poisoning mice and rats also kills off large cats and canines, the rodent population will proliferate.

"A breeding pair of rats can result in about 15,000 rats in a year, and a pair of mice can produce up to 1 million offspring in just over a year," Mahan said in a Wildlife Center newsletter.

“Anticoagulants will worsen rodent infestation. As you poison the rodents, you’re also killing their predators. If you kill off the predators, then rodents can multiply uncontained,” Tom said.

Want to help?
Use the link below to print and share this excellent flyer produced by the National Park Service on the dangers of rat poison to local wildlife. 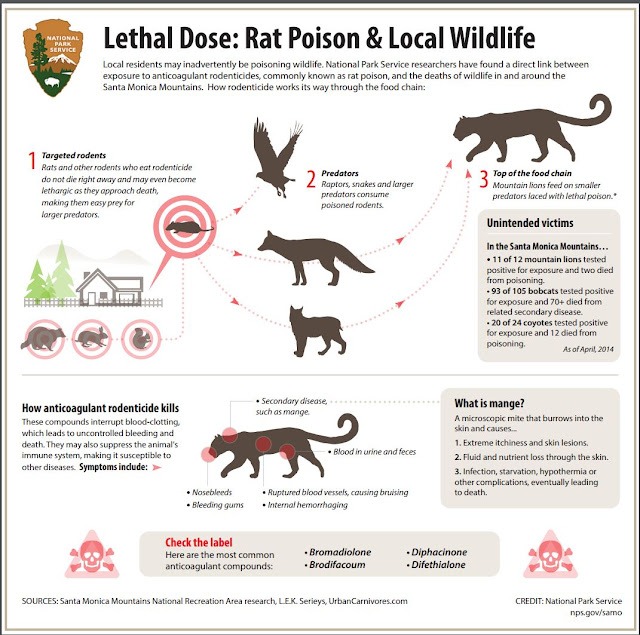 Personally I think it would be great if every retail store that sold poison bait had to post a similar flyer next to the rat poison shelf. Also all exterminators should provide customers a copy before using poison bait outdoors. If consumers were aware of the true risks of poison bait to wildlife, I believe most would choose alternative methods to deal with rats.

Email ThisBlogThis!Share to TwitterShare to FacebookShare to Pinterest
Labels: All about Pack Rats, Poison Realted, Snakes & Other Wildlife