I have lived in Arizona over 40 years and my wife, Sheryl is a native.  In fact her family were early pioneers.  We love Arizona and we often get out to places not listed in the typical travel guide.

I plan to use my MPR blog to share some of those places.  Last year we took a day trip to Kentucky Camp, an old gold mining town located in the Santa Rita Mountains.

The drive is quite scenic and only about an hour from Tucson. Take Highway 89 (the road to Sonoita) to the Gardner Canyon turn-off.  Once you turn, you have about 5 miles of gravel road to travel. The road forks, so be sure to follow the signs to Kentucky Camp.  The road is dirt but in decent shape. If you take a car, you may want to hike the last mile in, but a regular pick-up or SUV should be able to make it all the way without a problem.  There are several old adobe building and some old mining equipment around to look at. The area is beautiful terrain with lots of scrub oak.  A nice break from the desert.

The forest service is doing some restoration and even has a small cabin on-sight available for rental.   It is rustic - look close at the sign below, "Bed and No Breakfast Inn".

There are not many ghost towns open to the public that are in as good shape as Kentucky Camp.  You can wander around at will.  The area is open range so expect to see some cattle.  Pack a picnic, or head down to Sonoita for lunch.  You will not be disappointed.

For more information on Kentucky Camp and the forest service cabin rental check out the links below: 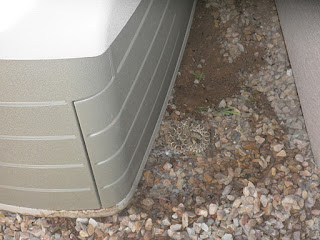 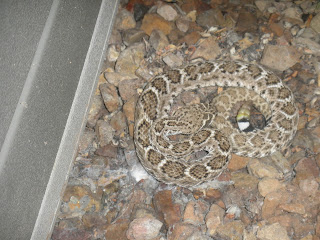 The other day I had an unexpected encounter with a rattle snake - in January!

From March to November we often come across rattle snakes. Snakes eat rats and snakes like to hide in dark protected areas. What better place to live than in a rat nest - a cozy home and dinner comes to you.
When the weather gets cooler, snakes usually move into winter dens, often in rocky areas with an eastern exposure to catch the morning sun. It is not unusual for multiple snakes to nest together in the cold. When dealing with rat nests in rocky areas, I am always on guard regardless of the time of year.

On this inspection I was in a nicely landscaped area. There was a plastic storage container just a few inches from the house sitting on gravel. Never a good idea, because pack rats love narrow spaces and the gap between the wall of the house and the storage bin was perfect. The rats use the sheltered area to dig in and make a home either in or under the storage bin.

Sure enough there where signs of digging behind the bin, so I reached down to slide the container away from the wall to explore further. The bin was full of items and heavy, so I had to slip my hand under the edge lift, as I moved it over the gravel.

To my surprise there was a rattle snake just inches from where I had put my hand.

Fortunately, the weather was sunny but cool and the snake was lethargic. I grabbed my snake tongs and moved it a safe distance away from the home in a sunny area with lots of nearby shelter.
Two valuable lessons learned. The home owner learned not to put storage containers next to the house and I learned to NEVER assume it is safe to not be on guard for snakes regardless of the time of year or location.
Kris
Posted by Kris No comments:

A sad day.  I recently found a large dead owl with no obvious signs of trauma.  A typical case of secondary poisoning. 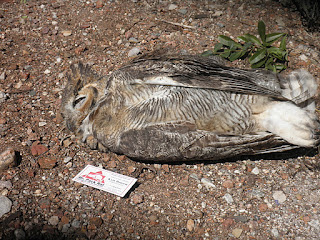 People with the best of intentions put out poison bait for pack rats not realizing the risk to owls, hawks and other wild life.

Rat poison was never intended for pack rats. It is designed and specifically labeled for Norway and roof rats.  Urban rats that have adapted over thousands of years to live with man off his garbage.  Pack rats are wild animals.  We moved into their territory.

Urban rats are bait shy, so modern poison baits have a built in time delay.  After the rat eats the poison, there is no effect for 3-4 days. Then the rats gets sick and slowly dies over a period of 5-10 days.  During the first four days, the rat may repeatedly eat the poison building up a quantity in its muscle and stomach.

When the rat gets sick, it does not act right.  It becomes slow, may be out during the day time and just doesn't act right.  Easy prey for a predator.

The predator eats the rat and the poison passes directly to the predator.  Some types of poisons are not as bad if it is only in the muscle of the rat, but any poison still in the stomach is especially deadly.  Birds of prey, because of their metabolism, are especially at risk.

The predators die.  Sure some rats will die too, but the rats reproduce very quickly, owls and hawks do not.  Over time there are fewer and fewer predators, but more rats than ever.

PLEASE - never use poison bait and encourage your neighbors not to either.


There are better,safer and more effective ways to deal with pack rats.

Kris
Posted by Kris No comments:

The recent cold weather has some pack rats on the move.  A great nest in mild weather may not be adequate when the temperature drops.  This time of year we see an increase in calls for rats in the attic.

This is especially true of younger rats that may have not had the time or experience to build an all weather nest.

It does not take much of a hole for a rat to find its way in.  Even a small gap can be enlarged to make a classic rat hole.  See the picture below.  This hole sits above a beam and was not visible from below. 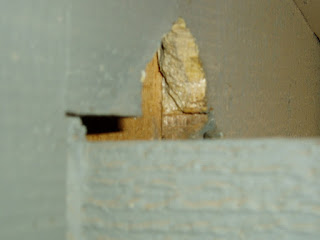 How do you know if you have rats in the attic: 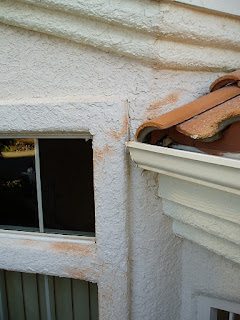 What to do?
Kris

Email ThisBlogThis!Share to TwitterShare to FacebookShare to Pinterest
Labels: All about Pack Rats
Newer Posts Home
Subscribe to: Posts (Atom)